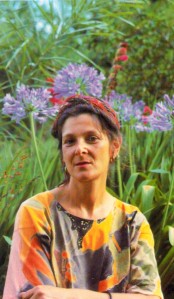 I danced through the garden of my childhood, both literally and metaphorically and at an early age already knew the names of many plants. Having fled Hitler’s Europe, my parents made gardens which undoubtedly represented new life and opportunity. My childhood holidays involved nature walks in mountains and seascapes and many  weekends saw us picking mushrooms or blackberries in the hills outside of Melbourne.
After finishing university, I spent several years living and working in Europe and  fell in love with village and rural life on the Greek island of Rhodes after which I developed a yearning to live in the countryside. A decade later in the late 1970’s my ‘second life’ began.  I left a marriage and my profession as a student counsellor,  had completed art school as a mature student. Now in a new relationship, my partner and I bought a rural property in sub-tropical northern NSW. This environment had a profound effect- Nature/ Life-force/Landscape informed much of my work for a number of years and the image of Woman as symbol of myself re-emerged intermittently, its origins in the psychological landscapes of the late ’70’s .
The old dairy bales became my studio, gardens were well underway. The surrounding mountains , the gardens we planted, the animals,  the sheer joy of life became my source of inspiration.  Commencing with the immediate environment, the body of work  culminated in the Pyramid series, unpeopled, symbolic, investigating the nature of time and the state of our planet- high key colour gives way to more sombre tertiary colour.

The development of Bonney Bombach’s work parallels her interest over the past twenty years, in the modern and post-modern philosophical and cultural debates about ‘womanhood.’
But whilst her alignment with feminine concerns forms an important influence in her life, her sensibility remains as an artist steeped in empathy for the natural and imaginative environment, from it constructing a frame of reference for her work.
Bombach’s earlier works were ‘psychological landscapes’, the roots in Art Brut, which have, since moving to the sub-tropical north, developed to  become a dance through mountain-and garden-scapes. Here, rainforest, palms and vines remain in their element. These works are located within her more immediate personal and geographic environment.
Layers of fine paper, often including woodcut prints, are worked over at the same time, from front to back and back, with wax crayon, washes and oil stick. Each layer matures in its own right when parted and re-worked. This allows the work to attain an individuality while maintaining the collective, elemental connection.
The larger oils extend the serialized, process-oriented nature of the work. This also allows the process of reference- dexterity, expression, working forward and backward, the shifting and intervals of time and place- in describing a subject in flux, to generate a bold yet complex motion.
The movement (and mobility) combined with Bombach’s astute compositional abstraction does allow an easy settlement to run the risk of suspending the artwork’s animation. Her skill as a painter presents us with objects that take their pleasure from the play and harmony of elements in co-operation.
Bonney Bombach presents us with works that are like tapestries, richly woven and embroidered to conjure up the essence of a dance, which basks in the wonder and fruits of the garden.